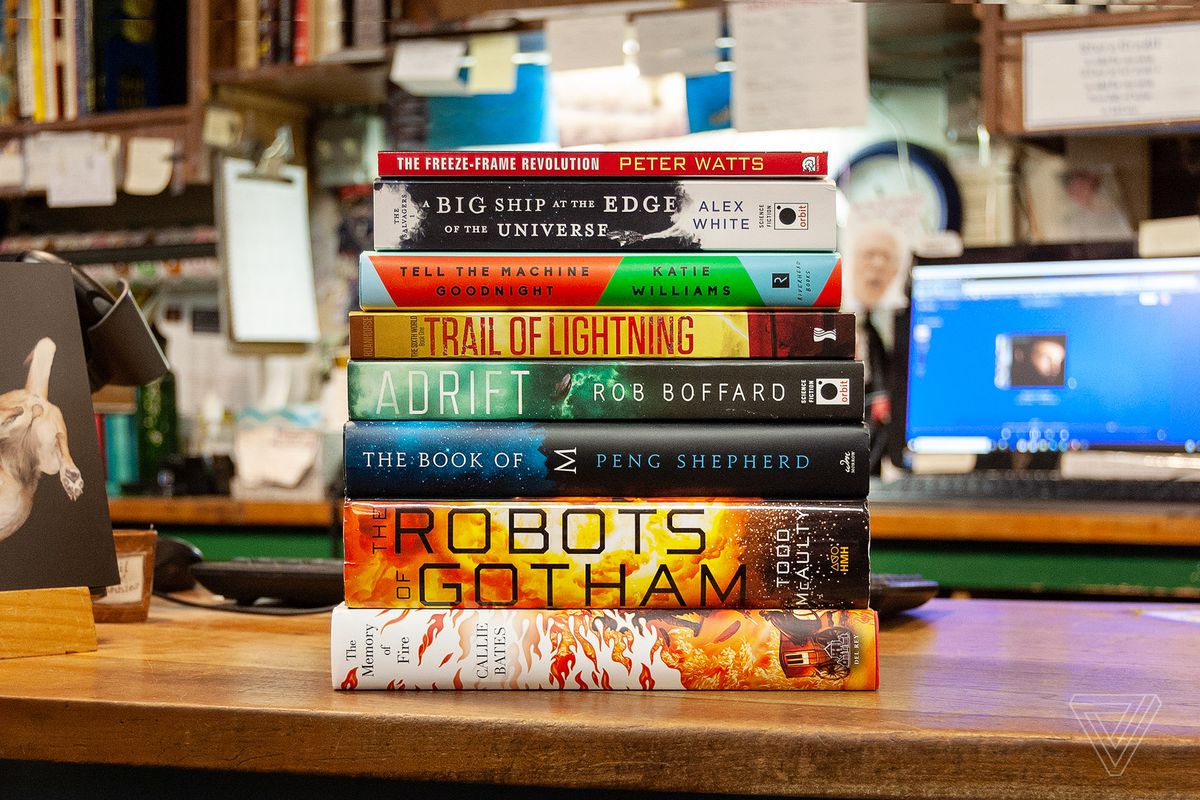 I’ve been writing and editing military science fiction for years. In that time, robots, drones, and artificial intelligence have been slipping onto real-world battlefields. When people think about robots on the battlefield, they often envision something like the Terminator or the Cylons from Battlestar Galactica. But the reality is far more nuanced than pop culture would have us believe.
That reality is laid out in Army of None: Autonomous Weapons and the Future of War by Paul Scharre, who my colleague James Vincent’s recently interviewed. I recently picked up Army of None, and Scharre takes readers through how militaries are using autonomous tech in 2018 and the ethical and practical considerations that have cropped up along the way.
Back in the world of fiction, here are 13 science fiction, fantasy, and horror novels coming out this month that you should check out.

The Memory of Fire by Callie Bates
Callie Bates released her debut fantasy novel The Waking Land last year, and she’s following it up with a sequel called The Memory of Fire. In her new novel, a girl named Elanna Valtai grows up in a foreign court as a hostage, only to flee to an unrecognizable homeland when the king is murdered, aided by Paladisan noble Jahan Korakides. Upon returning to Paladis, Jahan must hide his abilities and when Elanna is returned to the capitol in chains, he must try and save her and the brewing revolution.
Adrift by Rob Boffard
Sigma Station is a luxury hotel located deep in space. When a tour ship embarks on a short trip to visit the Horsehead Nebula, the station is destroyed by a mysterious attacker, leaving the passengers as the only survivors. With no supplies and no one coming to rescue them, it’s up to them to figure out how to survive. Publishers Weekly says the novel is an “action-packed adventure [that] is made for summer vacation reading.”
Outbreak by Melissa F. Olson
In Nightshades and Switchback, Melissa F. Olson introduced a world in which vampires exist (they’re called Shades) and a Bureau of Preternatural Investigation is tasked with hunting them down. The bureau’s Chicago field office has faced violent attacks as well as an inexplicable, violent escape by a suspect. In Outbreak, the latest installment of this episodic series, Agent Alex McKenna finds himself the target of an internal investigation as well as several dangerous escapees.
The Book of M by Peng Shepherd
In India, something strange happens: a man’s shadow disappears, and scientists are at a loss to explain why. The phenomenon becomes an epidemic known as the Forgetting, granting the afflicted strange powers but robbing them of their memories. Ory and his wife Max have escaped the Forgetting by hiding in an abandoned hotel for years, but eventually, Max’s shadow vanishes, and she flees. Ory follows her across a vastly changed and dangerous world as rumors of war and a mysterious savior arise. Publishers Weekly saysthat “Shepherd’s debut is graceful and riveting, slowly peeling back layers of an intricately constructed and unsettling alternate future.”

Revenant Gun by Yoon Ha Lee
With his novels Ninefox Gambit and Raven Stratagem, Yoon Ha Lee has written one of the more interesting science fiction sagas in recent years, earning Hugo and Nebula nominations for each book. With Revenant Gun, he brings his Machineries of Empire trilogy to a close. Earlier in the series, a disgraced soldier resurrected a brilliant, long-dead general, Shuos Jedao, only to be possessed by the man. Nine years later, Jedao reawakens believing that he’s a 17-year-old cadet, and his orders are to unify the hexarchate, an interstellar empire. The problem is that Jedao doesn’t remember his wartime experience, and the soldiers under his command despise him for his prior, checkered history.
The Freeze-Frame Revolution by Peter Watts
Set in the distant future, the crew of the Eriophora spends 66 million years building wormhole gates, awoken for a day every million years by their ship’s AI. One crew member, Sunday Ahzmundin, works to unravel the mystery behind the death a fellow crew member, all while watching her fellow passengers plan a mutiny one day at a time across millennia. Publishers Weekly gave the book a starred review, saying that it’s a “short, tight novel that contains vast science-fictional speculation.”

Hybrid Child by Mariko Ōhara, translated by Jodie Beck
You don’t usually see university presses publishing science fiction novels, but in the last couple of years, the University of Minnesota Press has released a series of translations of classic Japanese novels, such as Yoshio Aramaki’s The Sacred Era and Kawamata Chiaki’s Death Sentences. The latest is Mariko Ōhara’s Hybrid Child, and it’s the first time that it’s ever been translated into English. A cyborg known as “Sample B #3” was designed to be able to transform into anything he ingested. He assumes the identity of a technician and escapes, while a murdered child named Jonah becomes the spirit of an AI-controlled house.

The Robots of Gotham by Todd McAulty
In this future, the United States waged — and lost — a war against a coalition of machines, and it’s now under robotic occupation. A businessman named Barry Simcoe meets a Russian medic working with the occupying armies after his hotel is attacked. Together, they learn of a plot to unleash a plague that could wipe out humanity once and for all. Publishers Weekly gave the book a starred review, saying that the book has a “breathless momentum,” and that McAulty “extrapolates a scary AI-overrun 2083 that’s only a few steps removed from today’s reality.”
Tell the Machine Goodnight by Katie Williams
In this near-future San Francisco, tech companies and virtual reality reign supreme. Tell the Machine Goodnight follows Pearl, who’s helping her son fight an eating disorder, Valeria, who is weighed down by secrets in her life, and Calla Pax, an actress who feels utterly disconnected from the world. All of them use a machine called Apricity, which makes a series of strange recommendations designed to increase one’s happiness, but questions linger about how effective it really is and how it defines “happiness.” Kirkus Reviews gave the book a starred review, saying that it has a “compelling vision of the future, deeply human characters, and delightfully unpredictable story.”

Summerland by Hannu Rajaniemi
Finnish author Hannu Rajaniemi earned a considerable amount of acclaim for his hard science fiction Jean Le Flambeur trilogy (The Quantum Thief, The Fractal Prince, and the Causal Angel). His latest novel, Summerland, is set in 1938 after spiritualists discovered that there is an afterlife: Summerland. The recently deceased end up in the alien-built metropolis and communicate with Earth via mediums. The British Empire has firm control over this afterlife, and they’ve learned that the Soviet Union has its own plans, and the technology to attempt to attempt to build their own God. When British agent Rachel White learns of a high-placed Soviet mole in her agency, she’ll have to go rogue to stop him. Kirkus Reviews says that the novel is a “jaw-dropping, knowing, hyperintelligent yarn.”
Trail of Lightning by Rebecca Roanhorse
Last month, Rebecca Roanhorse earned a Nebula Award for her short story, Welcome to Your Authentic Indian Experience TM, and this month, publishes her debut novel, Trail of Lightning. Climate change has wrecked the world, and a Dinétah, a former Navajo reservation, is experiencing a revival, as do legendary heroes and monsters. Maggie Hoskie is a hunter who tracks down supernatural monsters. When a girl goes missing, she’s brought in to help, only to discover that she’s up against a terrifying monster. Publishers Weekly gave the book a starred review, saying that it’s a “rich tale from a strong Native American voice is recommended for all fantasy audiences.”
The Cabin at the End of the World by Paul Tremblay
Paul Tremblay’s recent horror novels A Head Full of Ghosts and Disappearance at Devil’s Rock are gripping reads. They’re deeply aware of the tropes that earlier horror novelists have laid down, from ghosts to exorcisms, and they leave just enough to the imagination to make you wonder if they contain any supernatural elements at all. His latest, The Cabin at the End of the Woods, is Tremblay’s take on the home invasion story. A young girl and her family find themselves under siege from a group of mysterious assailants, possibly with the fate of the world at stake. Kirkus Reviews called the book a “striking work of psychological horror and unblinking terror,” and we might see it in theaters before too long since FilmNation acquired the rights for the book earlier this year.
A Big Ship at the Edge of the Universe by Alex White
In this first installment of a new series from Alex White, a crew of spacers come together as they try and track down a long-lost warship. The book’s editor Brit Hvide describes it as “Fast and the Furious meets Firefly.” A racer named Nilah Brio witnesses — and is framed for — the murder of a fellow driver. To clear her name, she goes after the killer, who’s also on the trail of a washed-up treasure hunter named Boots Elsworth, who happens to know the location of a legendary warship known as the Harrow.

The US State Department announced yesterday it’s going to shorten the length of visas granted to Chinese citizens, a move to combat the supposed theft of US intellectual property, according to the Associated Press. Although the visa application process itself won’t change, Chinese citizens working or studying in specific fields won’t have as easy of a time […]